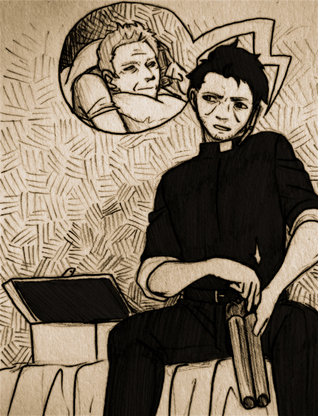 Archive of Our Own

The story follows Castiel Collins who is a priest and a hunter living in a church while his brother Balthazar drives around following various hunts. One day while closing the church, an angel, Dean shows up at his doorstep in search of an amulet. At first Castiel can’t believe that angels exist but after a bit of convincing from Dean, he believes him. Cas retrieves the amulet for Dean and never expects to see him again but is proved wrong when Dean shows up with a grievously injured Sam at his door. After taking care of Sam, Dean asks Cas to carve protective sigils into the walls of the church to prevent them from being detected. From here on, starts a journey that will have heartbreaking moments, near death experiences and the birth of a beautiful romance.

For those of you who don’t understand the term Reverse Universe, it means that the story follows a canon storyline but every character’s role is different or ‘reversed’. In this story we see Dean and Sam as angels and Cas and Balthazar as hunters. With me so far? Okay. As far as the story goes, it follows the canon storyline season 4 onwards. There are some tweaks but it just adds to it.

I have loved reading Riseofthefallenone’s work since I read her first fic Out of the Deep which is the longest fic I have ever read (it was over 2000 pages on my iBooks). Her work is stunning and her stories and world building could be books all of their own. Anyway, coming back to topic. This fic is quite long as well and just as great as the others.

There were some concepts that she used from season 8 (the holy oil burned glasses) and added her own theories to them which were quite plausible. I did enjoy the moments where Dean would hug Cas and he would feel an extra tingly sensation as well which were Dean’s wings. Just thinking about that is just so feelsy.

I loved that in this story Sam and Dean got a home. In canon they have the Men of Letters bunker and here, thanks to Castiel, they got to share in the little rectory. They had a place to call home and every time that’s mentioned I just turn to mush. It’s so sweet and lovely.

There are a lot of dark moments as well. They are fighting a war with both angels and demons and there are many touch-and-go moments for the characters which have you clutching your phone/tablet and reading faster than ever before. If you’re looking for a good semi-canon Destiel fic, then you should give this a shot. Fair warning, there is mature content so, unless you’re comfortable with it, don’t read it.

I rated this beauty a 5/5 stars. If you’d like to see more Destiel fic reviews, just follow this blog and I will post reviews as often as possible. Until then, embrace your weird!