I could really see why Dean was mighty pissed when he came back from the Alternate Universe, that Gabriel had walked out with his Grace intact. Why had Sam and Cass been so damned stupid, and let the mission down. Dean couldn’t get back into the AU to save Mary and Jack now because Gabe had walked away with the prize they so desperately needed to get hold of in the beginning. Didn’t this even cross Sam’s mind that his Grace was still required for their mission. Now the hunt appears back on to trace Gabe and get him back to the bunker toot sweet!! 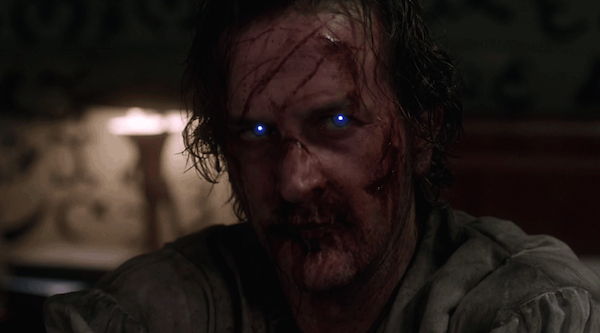 I get drama is the order of writing these days, but this feels so far damned stretched that being smart seems to disappear out of the window. I have seen Dean pissed but never quite so as in this episode. I thought at one point Dean was gonna punch Sam for being so irresponsible, that the mission had failed once again!! Most know by now I am a Sam  fanatic, and in his tenure he’s done some dumb things but this has taken the biscuit to an all NEW HIGH! Sam is the one 80% of the time gets them out of their scrapes because he is on top of his research. The one who sits behind his laptop and digs for clues, the proper fake detective at work in all his glory? Not on this occasion??? Why was Sam so far off the ball and not thinking outside of his damned box? At times I think the writers really don’t look behind them at the characters history of what was before. Sam would normally be on top of this and not fail such an important mission. Its damaged what could have been a final attempt of getting through the rift and allow another day to search for Mary and Jack.  Lucifer is their only other option to get that rift back open. As Raphael and Michael are both dead.  How long will it be before they find Gabe? Will it be so easy to find him a second time?

As the season is coming to a close with a handful of episodes to go, tension is high and minds distraught about getting that grace and going through that rift again. Will Lucifer’s grace even cross Sam and Dean’s minds as an option? We know one death will happen, and wonder if Lucifer’s day’s are really numbered, that I have a suspicion he won’t make it. Crowley died last season, is it Lucifer’s demise this year?

I did enjoy Gabe’s wings looming over Asmodeus and clapped at his death scene, knowing what he’d put Gabe through and Gabe had his day in bringing him down. But I wonder if Lucifer will create another prince of hell to serve him, since this is what Lucifer truly wants, overall power and people to obey him.

What are your thoughts on both Sam and Cass giving Gabe back his grace. Do you think it was an irresponsible act knowing how it could possibly damage this mission? Could they have perhaps kept some back just in case? Give Gabe his rightful powers back yes, their his, their his angel rights? Asmodeus shouldn’t have taken them in the first place, and Gabe was lucky that Ketch had retrieved them and had the sense to take the tube to the bunker with him. Then Sam and Cas were so flippant in just giving it back to its rightful owner. Thinking they were doing the right thing on his part?

So who’s grace do you think they will use a second time, to be able to open the rift now?

Photograph’s: Courtesy and Property of ‘The CW’

2 thoughts on “I thought SAM was the SMART one?”